Our culture values innovation but does it pay off in business?

Innovation. Imagination. Barrier-breaker. Words used to celebrate and glorify an act of independent thought. Our culture places value on individual experiences and achievements. From scientific breakthroughs to new products on the market, we are taught from a young age to seek and celebrate the new. But in business, first doesn’t necessarily mean profitable. In fact, 97.8 percent of the value of new innovations doesn’t go to the orginiator, instead, the market rewards the imitator.

Yes, the profits go to the counterfeiter. Considering the lion's share of profits go to imitations, it is unusual that this proven strategy isn’t more widely discussed in classrooms and boardrooms. Considered a taboo subject, businesses often approach imitation clumsily without proper planning or implementation.

But implementing the strategy of imitation doesn’t need to be viewed as a moral crossroads. If imitation is indeed the highest form of flattery, then imitation in business is at the heart of continuous performance improvement.

The Cost of Business Innovation

Innovation is widely championed in business. This broad term is a catch-all for developing new products and services for the market. But often innovation programs yield few results. Under the competitive threat that “if you are not innovating someone else is,” companies often stumble to implement true innovation-reward programs within their organizations. Most aspire to develop creative new products, services, and processes, but the evidence is mixed as to their ability to do so successfully.

A big contributor to the lack of innovation within organizations is the cost of innovation. A recent study from the Stanford Institute for Economic Policy Research discusses the growing costs involved in innovation. Organizations today are investing 20 times as many people to R&D as their peers did in 1930, but the output from all of this endeavor is not rising in unison. This investment has seen expenditure on R&D doubling every 13 years purely in order to maintain the same level of output. That growth rate threatens most private and family-owned businesses cash flow and operations beyond their growth rates. The only way to find a successful outcome that includes innovation is to achieve the opposite — fewer R&D specialists and more innovations. 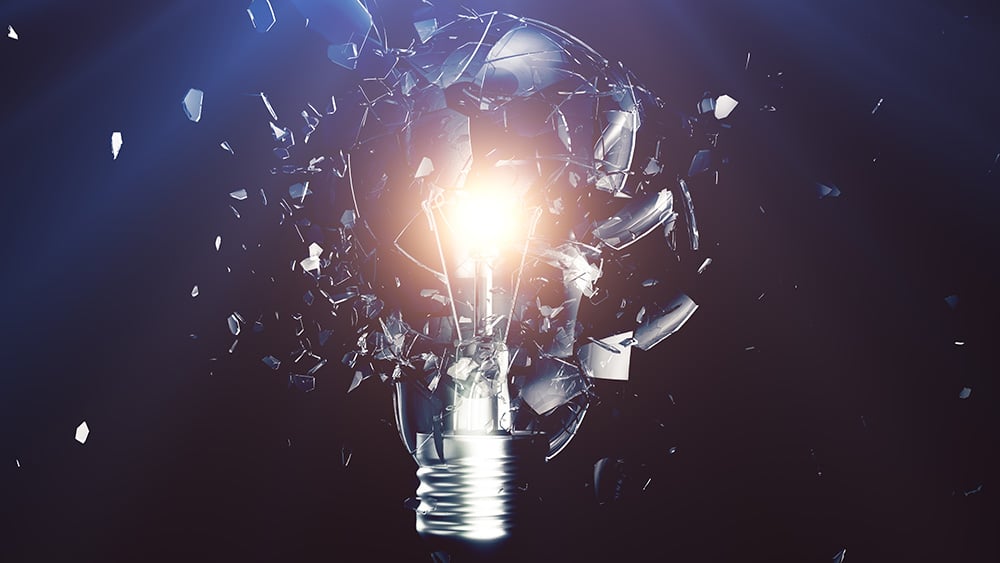 Breakthroughs don't often happen in a lightbulb “ah-ha” moment so often championed by our culture.

Imitation is the Modern Innovation

Challenging the thought that innovation has to be original, previous research demonstrates how a growing percentage of innovations are recombinative — innovations that take existing ideas and technologies, and apply them in new ways.  In this case, imitation is the highest form of flattery. This is easily seen in the medical research industry. Drugs taken to treat enlarged prostate glands also can be used to combat male-pattern baldness. Medications for depression also work well for migraines. When originally innovated, these medications were not intended for that use, but later are applied in new ways. Buchannan’s research on the subject found that 40 percent of all patents fall under the category of recombinant innovation over nearly the last 150 years. This ratio is accelerating considerably as of late.

Recombinant Innovation has the potential to drive exponential innovation according to Martin Weitzman, who describes the potential for this type of innovation in his published paper on the topic.  He states that “fixed factors,” including buildings and hardware, have a value that can be derived when new ways are found and implemented to improve these assets.

Recombinant Innovation is not a new concept. How Breakthroughs Happen: The Surprising Truth About How Companies Innovate, by Andrew Hargadon (Harvard Business School Press, 2003) contains perhaps the most contrarian and somewhat unpopular concept of how breakthroughs happen. It isn’t a lightbulb “ah-ha” moment so often championed by our culture. It isn’t the starving artist or rogue scientist. Instead, it’s the effect of society and community — the culture and the camaraderie in which innovators find themselves.

Professor Hargadon states that innovators rarely come up with new ideas; instead, they convert old ideas into new ones, adapting them from one context to another. The examples are endless. Pasta originated in China and was brought to Italy by Marco Polo. Henry Ford’s inspiration for his automobile assembly-line technologies came from meatpacking plant assembly lines.  Musicians famously borrow ideas from one another, from Beethoven to Elvis Presley to the Beatles to P. Diddy.

Recombinant Innovation doesn’t happen in a vacuum. Like most functions, innovation thrives in a team environment. Beyond typical team dynamics such multiple ideas and perspectives, teams can also leverage this format to implement more agile functions such as failing fast, proof-of-concept tests and tapping into large social crowd testing. Some organizations leverage group settings to set open challenges to students or the public, paying only for the innovation if it is found and tested. This can be a risk-free and less costly approach to drive down the cost of R&D.

Innovation has been found to thrive in collaborative environments. Stanford’s Center for Advanced Studies in the Behavioral Sciences (CASBS), sequester its fellowship winners in isolated rooms for seven hours a day for a year. “You’re supposed to spend that time thinking great thoughts,” said former CASBS fellow and current U.C. Berkeley political science professor Steven Weber, author of The Success of Open Source (Harvard University Press, 2004). “It was fun for a little while. But by the time March rolled around, many of us were seriously depressed. We could not wait to get out of there,” Weber said.

In Hargadon’s  How Breakthroughs Happen: The Surprising Truth About How Companies Innovate, he debunks the notion that innovation depends on inventors. Focusing on the climate of creativity surrounding past innovative leaders, from Edison to IDEO, he found that innovation at its best relies on diversity. “IDEO works well,” says Hargadon, “because people from very different backgrounds are thrown together on a project team. They’ve each worked in three or four very different industries, so they might have 15 different bodies of knowledge to draw upon. And they are open to talking not just about their solutions, but about their problems and mistakes.”

“97.8 percent of the value of new innovations doesn’t go to the originator, instead, the market rewards the imitator.”

Establishing a culture of innovation that doesn’t stagnate or become cliche is challenging for most businesses. Once achieved, these teams can leverage their creativity by understanding that innovation doesn’t necessarily mean “unseen.” Instead, businesses can reinforce that imitation or “recombinant innovation” is also innovation. Once the stigma of improving existing innovations has been removed, teams are free to create without restrictions.

Outside business partners can leverage open innovation — collaborating with external companies toward innovation goals. This allows non-competing entities the opportunity to leverage their collective skills to drive innovation, exploring ways their unrelated products or services may combine to create new solutions. This approach lowers the overall cost of R&D by sharing it between multiple stakeholders. Leveraging recombinant innovation allows a team to build about an existing idea, product, or service instead of creating the same solution from scratch, saving time and investment. With the specialization market of services and products continuing to expand, the combinations for collaboration are exponential by partnering with a wide range of external organizations such as startups and independent vendors to tap into their insights and solutions.

However, establishing a safe space for teams to collaborate and thrive doesn’t require outside influence. An organization is only as rigid as its culture around teamwork. Management should strive to encourage the healthy exchange of ideas among teams and frequently diversify teams to leverage new ideas, talents, and points of view.

Breaking down the stigma of imitation and the lofty positioning of innovation requires redefining the meaning of those concepts within your corporate culture. Creating a safe space for teams to collaborate and diversify their ideas, within or even outside of the organization, will drive more reimagined ideas for existing solutions, applied in unique ways. By embracing the new as the reimagined, your company will drive measurable innovative results utilizing fewer resources and cost, capitalizing on the 97.8 percent available revenue from established innovation.