Fun with analytics: Probabilities and Scrabble

Here at Illumine8, we are driven by numbers in everything we do.

So what better time than on the eve of the 2017 North American Scrabble Championship to have a little fun with numbers and explore some of the intriguing statistics, probabilities, and lists behind America’s favorite word game?

Perhaps contrary to common thought, Scrabble is a mathematical game at it’s core. You have a finite number of acceptable combinations of letters to play on a 15x15 square grid littered with bonus points and multiplier opportunities.

The holy grail of those finite combinations are “bingos,” or plays where you use all seven letters on your rack to score a game-changing 50-point bonus.

The latest edition of the Official Club and Tournament Word List—the primary authority in competitive Scrabble in North America—contains just over 25,000 acceptable 7-letter words. But not all of those words are created equal. For example: You are much more likely to draw ANEROID (Probability Ranking: 1) than you are to draw MUUMUUS (Probability Ranking: 25,255).

Even for the elite players in the game, being able to memorize and recall over 25,000 7-letter words—not to mention the 31,475 8-letter words—is no simple task. This is where probabilities and likelihood can play a huge role in success.

If you only take the time to learn the most probable 1,000 7-letter words—many of which you already know like ISOLATE (PR: 40) and GROANED (PR: 385), and some you probably don’t like ANISOLE (PR: 39) and CARINAE (PR: 823)—you will have already accounted for almost one-fourth of the bingos likely to appear on your rack.

If entire racks are a little too daunting, there are plenty of interesting (and useful) analytics about some of the shorter Scrabble words.

Start with the two-letter words; the shortest of them all, and the real building blocks of a Scrabble game board. There are 105 acceptable two-letter words in the latest dictionary update, though none of them contain the letters C or V. The 10-point tiles Q and Z each have exactly one acceptable word (QI and ZA, respectively), while five acceptable two letter-words don’t bother with any consonants at all (AA, AE, AI, OE, and OI). 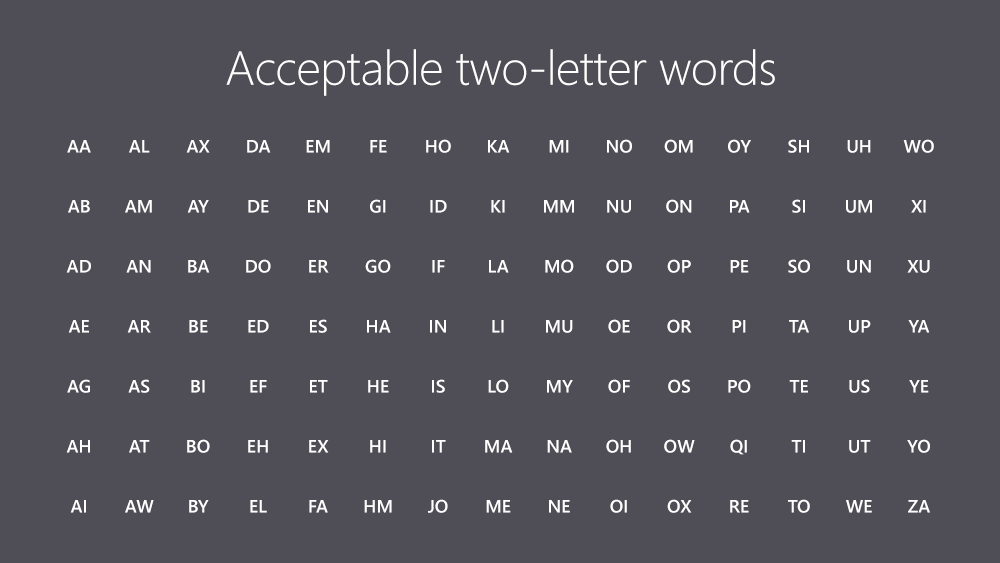 In the list of 1,081 acceptable 3-letter words, only one word (EAU) is 100% vowels, but a staggering 11 words—such as CWM, GRR, and PHT—are acceptable without a single vowel. It’s a similar story in the 4,214 acceptable 4-letter words with an additional seven vowel-less words like HMMM and PSST.

Let’s say you begin the game with AAEEEOZ on your rack. Looks pretty brutal, right? You could play ZA for 22 points, but then you leave yourself with AEEEO and a likely worse batch of letters on your next turn. But if you knew the list of 22 acceptable 5-letter words containing four vowels, you could play ZOEAE for a whopping 48 points and a much better chance for a good second turn rack. Other words in that list range from the common AUDIO to the lesser-known AALII (a tropical tree, allegedly).

Still hungry for some more some more numbers? Read about how we sat down with a symphony orchestra in Maryland and increased audience attendance by 400%. Either that or join your local Scrabble club.