In 2012, business entrepreneurship was at an all-time low. According to the Kauffman Foundation and the Brookings Institution, the number of new companies and entrepreneurial pursuits had dropped 44 percent since 1978. During that same year, Illumine8’s founder and CEO, Christina May, was named in the Frederick News-Post’s 13-Under-30 list of emerging leaders bringing “sexy” back to business and contemplating her own entrepreneurial leap.

The then 29-year-old was considering beginning what would become Illumine8 — a marketing consultancy serving established family-based businesses during a time when fewer considered the option. Today the rising profile of entrepreneurs makes the transition from corporate to business-owner a common trend, but that wasn’t always the case. A study of entrepreneurs by The Recruit Venture Group found that a third of business owners never planned on starting their own company.

“More success stories are being shared and that is demystifying the notion of entrepreneurship,” says Gareth Jones of Town Square Spaces. “Turning an idea or your skills into a profitable business, even if it just provides one person with a living, is realistic for many more people today.”

In spite of the challenges from raising finance and finding customers to managing with little personal income, only one percent of business owners stated they regret their decision to become entrepreneurs, while 12 percent wish they’d started their business sooner according to Recruit Venture Group. Ninety percent say they are happier than when they were employed.

May finds herself in that 90 percent.

“For me, it was just convincing myself to start a business,” May said. “One of the tipping points in my career for me was really starting a business. It took me three years to really understand and convince myself that this is something I could do. For me, that tipping point was having the confidence in myself to actually make the leap and I’ve never looked back.“

Eight years later, May reflects on the lessons learned, forging her own path between her time as a 13-Under-30 winner and now being part of DMN’s prestigious 40Under40 list as a business founder.

Q: When you won your 13-Under-30 award, did you envision owning a business as successful as Illumine8 less than 10 years later?

A: When I was awarded the 13-Under-30 recognition by the Frederick News-Post, I don’t think I had any idea that I was going to be starting a business. Some people have a background story where they wake up and say, ‘This is what I want to do with my life.’ But I’m not one of those people.

A: Reflecting over the 10 years, I was working in the construction industry, at the time, in my first position where I was at that director-level of really managing everything that was going on. And it was really great training — so to speak — for what I do now because it was really managing all aspects of a brand, not just one particular part, and coordinating between outside resources and internal resources.

Q: Now a DMN 40Under40 recipient, what piece of advice would you give to your 13-Under-30 self if you could go back in time?

A: I think that the one piece of advice that my current self would tell my former self would be, ‘Don’t think so narrowly,’ and ‘Really explore all of your options.’ That would have been right in that time when I was just starting to form the idea of, like, ‘OK, this isn’t working for me, what’s next?’ 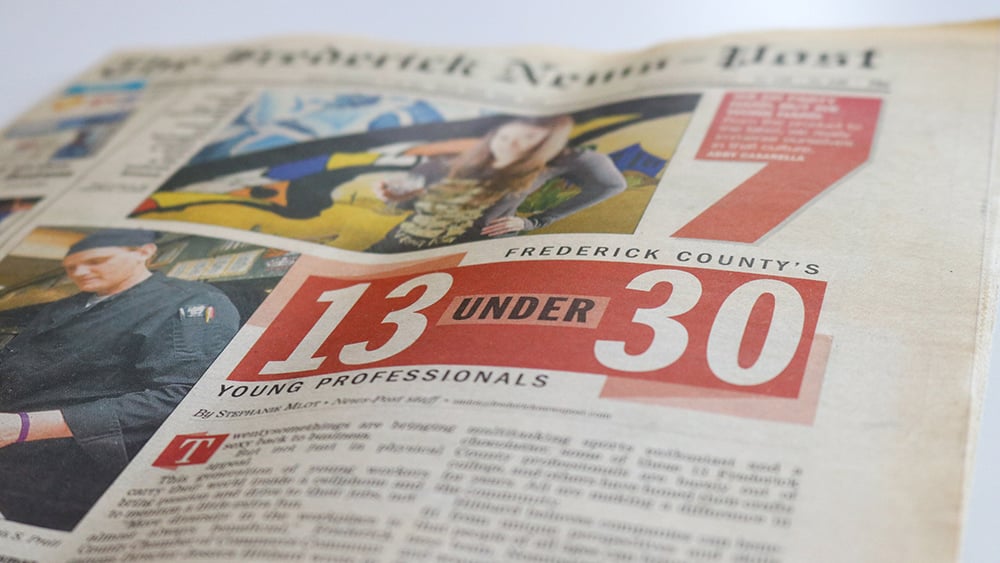 In 2012, May was named in the Frederick News-Post’s 13-Under-30 list of emerging leaders — contemplating her own entrepreneurial leap.

Q: How do you think your 13-Under-30 self would react to your current self?

A: The 13-Under-30 version of myself would have probably laughed at the 37 version of myself. And again, it just has to do with where you are in your life. It, one, makes you feel a little old, and two, it just makes me grateful for the experience.

Q: What are some of your biggest takeaways from networking with fellow 13-Under-30 and 40Under40 winners?

A: One of the things that is so unexpected (about owning a business) is how isolating it can be. So it feels great to be able to collaborate with someone else, to share notes with someone else in an uncompetitive environment because we’re all so competitive, and to really kind of be like, ‘Hey, OK, I’m not crazy; I’m not alone or we’re all crazy.’ Which feels great, actually, to not be the only crazy one.