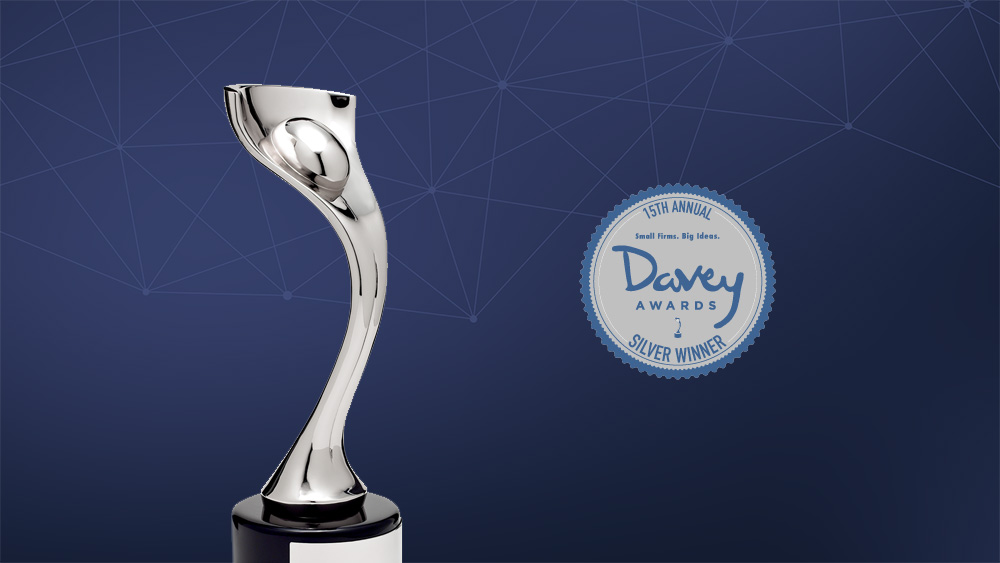 Illumine8 recently won a silver Davey Award for the logo design of its client, Lion & Dove.

The Davey Awards is an international competition held annually that was named and conceptually built around the classic story of David and Goliath. The competition “honors the achievements of the “Creative Davids” who derive their strength from big ideas, rather than stratospheric budgets.”

The Davey Awards are sanctioned and judged by the Academy of Interactive and Visual Arts (AIVA). The AVIA is “ an invitation-only body consisting of top-tier professionals from a “Who’s Who” of acclaimed media, advertising, and marketing firms.” Members and judges of the AVIA include executives from Disney, GE, Microsoft, MTV, Yahoo!, and more.

Entries are judged blindly and evaluated on “distinction in creative work”. Gold and Silver winners are judged on a ten-point scale, with gold receiving a 9+ and silver receiving a 7.0 to 8.9. For each medium, the judges will appoint an 11 to a single award that is designated “Best in Show”.

Lion & Dove is a brand of wine produced by a family-run Korta Winery and Vineyard in South America. The grapes that are used in Lion & Dove wines are grown and cultivated in Chile’s most productive wine region—the Central Valley. Once the wine is produced, DMV Distributing labels and distributes Loin and Dove wines to vendors in Maryland, Washington, D.C., and Delaware. Lion & Dove needed a logo to match the sophistication and quality of their product, and enlisted Illumine8 to bring their vision to life.

“Lion & Dove needed a standout product design to separate itself from the hundreds—if not thousands—of other wine brands on shelves,” said creative manager, Erik Pitzer. “We emphasized the importance of color early in the branding process. With several varietals, the color combinations needed to work well both collectively and individually.”

Pitzer collaborated with  Jay Ripley of Steel Heart Tatoo for the artwork. The two elements—the lion and the dove—flow effortlessly within each other to create a recognizable and unique illustrative element that is at the center of every label design.

The Lion & Dove logo marks the second silver Davey Award that Illumine8 has won, the first being an award for the website redesign of Cochran & Mann in 2018.

“The Lion & Dove logo is elegant and sophisticated, while still maintaining its own unique identity,” said Pitzer. “It achieved everything that wanted it to. It's a logo that you will notice when you walk by.”