Illumine8 After Hours recap: Guess if it's gluten 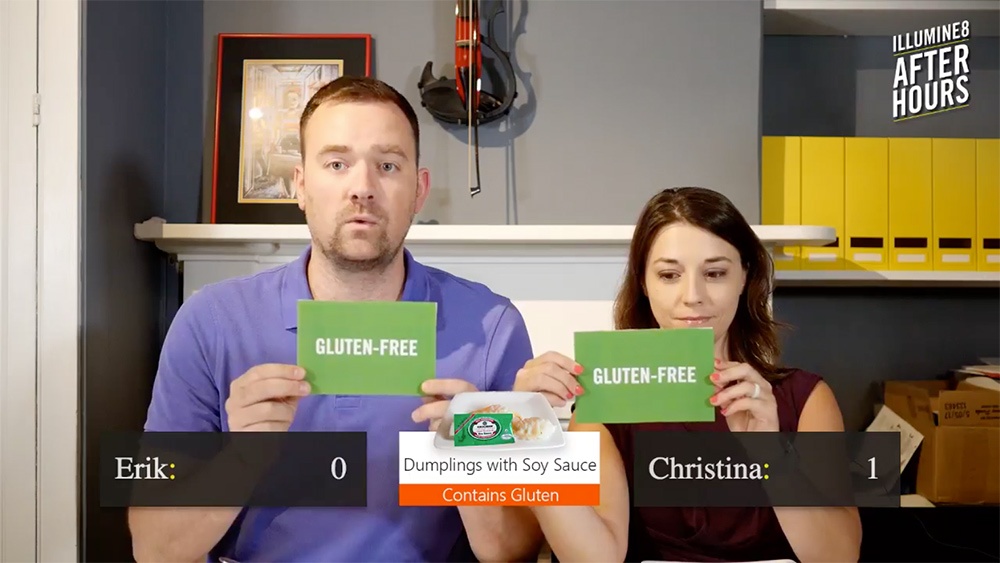 In the second installment of Illumine8 After Hours, Graphic Designer Erik Pitzer and CMO Christina May played “Guess If It’s Gluten,” to sympathize with our Inbound Marketing Coordinator, Mira, who lives with a gluten allergy every day and is an expert on being a gluten-free girl in a gluten-filled world.

Our team taste tested a total of six foods and made educated guesses based on flavor, texture, and life experience on whether or not they contained gluten. They also judged the descriptions of each food.

Here’s how it went down:

Company Description: When she dances under the stars, you can see them sparkling in her eyes. Her suitors line up for the mere chance to take her for a twirl. Whether big cheeses or big dippers, she greets them all with a smile and sends them on with a curtsey. She’s crisp and crunchy and the belle of the ball.

Even prior to reading the artful description, Erik was convinced that the chips tasted all right. He commended Glutino on its “beautiful prose” but didn’t think it lined up with what the product actually was. Christina enjoyed the creativity of the description but described it as the “Disney film of bagel chip descriptions.”

Company Description: We use free-range, all natural chicken. The chicken filling is packed with flavors of cilantro, garlic, and ginger. It's great as an appetizer, but because the filling is so generous in size, we think it could be a great meal, too!

Though the dumplings themselves were gluten-free, our team was tricked by one of their own, as soy sauce does indeed contain gluten. Erik didn’t “think this was winning any Food Network competitions” but still thought they were pretty good and appreciated the honest and realistic description more so than that of the previous product.

Company Description: The one. The only. The Original. It’s the iconic Cheez-It flavor you know and love. The square shape, the rigid edges, and that hole in the middle...everything about this baked snack cracker is the real deal, especially the cheese. The Cheez-It Baked Snack Crackers, 12-Count package is a tasty quick snack.  What gives baked Cheez-It crackers that real-cheese taste? Real cheese!

Erik finally gets on the board with “plain old Cheez-its,” which do, in fact, contain gluten. Our team was perplexed by the apparent keyword stuffing in the description which mentioned “real cheese” a total of 4 times along with several other variations of the term; but really, is there even such a thing as too much cheese?

Company Description: From the time of Annie’s first mac & cheese product in 1989, a small-but-growing group of you who are wheat & gluten-intolerant have suggested we produce a gluten-free macaroni and cheese. It may seem a gluten-free mac & cheese has been a long time coming! Now our Gluten-Free Rice Pasta & Cheddar is one of our most popular products.

This rice-based take on instant mac n’ cheese didn’t exactly remind our team of their college days, but they appreciated the basic, historical description of the product, as well as the well-known company’s concern for their gluten-sensitive fans.

Company Description: The fabulously fudgy brownies in the non-dairy version of this fan favorite come from New York’s Greyston Bakery, where producing great baked goods is part of their greater-good mission to provide jobs and training to low-income city residents.

Due to the distinct, non-dairy, not real taste, Christina knew exactly what this product was at first spoonful. Our team enjoyed the feel-good description by Ben & Jerry’s, but they weren't impressed with this ice cream imposter and took offense at what it was pretending to be.

Description: “Please refrain from discussing feelings in the vicinity of the meat.” -Ron Swanson

These homemade chicken wings were made by our very own Technical Lead and grillmaster, Mark, with a special contribution by Frank’s RedHot sauce. Both Erik and Christina guessed correctly, ending this week’s After Hours in a tie.

Mark’s Wings were a team favorite with the chicken dumplings coming in second, and the Disney princess bagel chips as a runner-up.

Stay tuned for the next Illumine8 After Hours on Friday, September 1! In the meantime, check out what how we helped a Frederick, Maryland, restaurant grow and become a key part of the foodie scene.