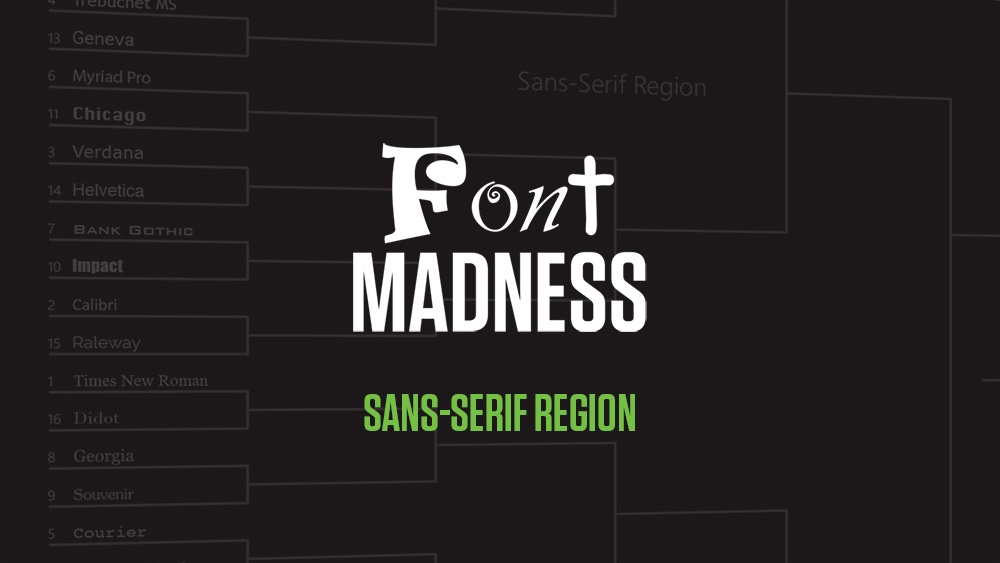 Let the voting begin! Font Madness — our quest to crown the worst font ever — officially kicks off with the first round in the Sans-Serif Region. Comic Sans tops the bill, as the deserved heavy favorite out of this region, but several potential Cinderellas are in the running, as you go through the match-ups.

Let's just address the elephant in the room straight away: Comic Sans and Papyrus are the odds-on favorites to meet in the "championship." If you need an explanation here, you're probably not qualified to cast a vote.

Why Eras Demi ITC Is The Worst

Everyone loves a good 16-seed underdog story, but nothing dashes excitement quicker than that story written in Eras Demi ITC. The font doesn't make you cringe so much as it makes you dismiss its importance. I cannot think of one occasion where it's appropriate to use this font.

Why Tahoma Is The Worst

Tahoma's claim to fame is not being Verdana (which in turn only exists to not be Arial). It peaked in the early 2000s as one of the few "safe" fonts to use on the web, because everyone had it installed on their systems. In a world where everyone was seeing Arial, Tahoma was an oft-welcome breath of fresh air. But like many things from the early 2000s, any once-positive vibes have long since expired.

Why Arial Is The Worst

Arial is peak apathy. Its only defense against being the worst is that it has decent readability in paragraphs. Congratulations, Arial, you've achieved the minimum requirement of being a font. That's like patting a potato on the back for being edible.

Why Geneva Is The Worst

Geneva leads you to believe that it scores hipster points for being one of the orginal 12 fonts on the first Macintosh operating system. In reality, it's so medicore that the actual reason for its existance was to strive to be like Helvetica.

Why Myriad Pro Is The Worst

In a world where Times New Roman and Arial existed as your undisputed default fonts, Adobe decided that Myriad Pro was going to be the default font for most Creative Suite applications. Now, in addition to "OMG! Apple's old font!", Myriad Pro is the poster child for apathetic designers.

Why Helvetica Is The Worst

Helvetica is. Literally. Everywhere. Sure, designers tell you that it has a bajillion different weights and is so versatile, but that's exactly the problem. It's so post-hipster that it has its own line of self-aware t-shirts.

No, this is not a cool, edgy font. It's an overused movie poster font that only gets selected because it's slightly wider than most other default system fonts. What a concept! Oh, and it has its own Tumblr.

Why Impact Is The Worst

We get it. Impact is the meme font. Memes are funny. Unfortunately, being the vessel for an internet joke doesn't always equate to a good font. Approximately 3,700 better choices exist for when you need a condensed font.

Why Calibri Is The Worst

If you’re reading something in Calibri, a 98 percent chance exists that you’re in a horrible mood. You’re either stuck watching an afternoon-long presentation in a La Quinta Inn conference room, or you’re scouring archived Microsoft help articles because you’ve seen the blue screen of death for the third time this week. Sorry for your bad luck.