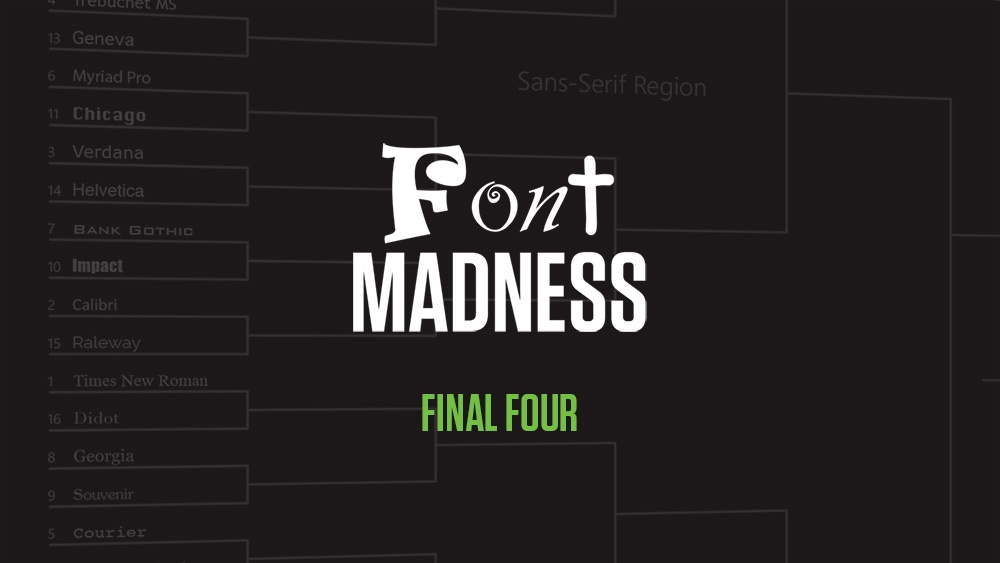 Unlike their neighbors Loyola-Chicago (the real life basketball team), fellow No. 11 seed Chicago (the font) couldn't continue it's Cinderella run to the Final Four, getting edged out by No. 1 seed Comic Sans in a close vote.

Goudy Stout continued its dominant rampage through the serif region, where it posted an astounding 93.5% average total margin of victory.

It's hard to call this a "David vs. Goliath" match-up. Comic Sans is certainly a tournament favorite and a well-known punching bag of font hate, but something is literally Goliath-like about Goudy Stout.

We've addressed the elephant in the room straight away: Comic Sans and Papyrus were the odds-on favorites to meet in the "championship." While Papyrus faltered in the loaded decorative region, Comic Sans polluted your screen all the way to the Final Four.

Kristen ITC outplayed its seed and took down Noteworthy, Lucida Calligraphy, Vivaldi Italic, and Chalkboard en route to its somewhat surprising appearance in the Final Four. How terrible does a font have to be to beat all four of those other awful fonts?

And Waker? Not much else to say here. It emerged in a region of fonts that were deemed worse than Papyrus. I did not know that was possible.

Why Kristen ITC Is The Worst

Oh, come on. You're better off taking a physical crayon and just haphazardly scribbling over your monitor than you are producing any material written in Kristen ITC.

Wow. There's a lot to unpack here. This is a bad font even without the Chia Pet hair, but I'm guessing by the font name that those wildly unnecessary lines are supposed to be...sunbeams? I don't know. The actual answer doesn't matter. This is so awful.